My Tweets
Posted on October 31, 2019November 2, 2019 by Carla Cunha
This month’s post features work from two of our student members, Alana Stein and Nadia Smiecinska, from their research on how nations use a “citizen-consumer” discourse at the 2015 World Expo on food security. 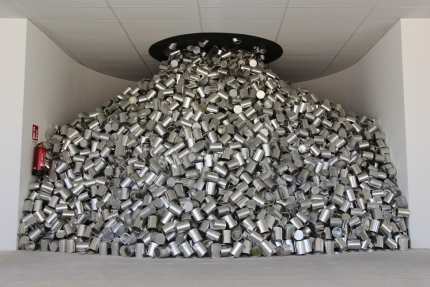 Consume This! The Politics of “Feeding the Planet”

“You Are What You Eat,” the famous cliché of the French gastronome Jean Anthelme Brillat-Savarin, was chosen by South Korea to be the central theme of their presence at the 2015 World Expo. At World Expos (or World’s Fairs), countries construct pavilion buildings to showcase their exhibits, which seek to display their achievements and solutions related to the Expo theme. From May to October 2015, the World Expo themed “Feeding the Planet, Energy for Life” took place in Milan, Italy, where countries were asked to address issues of food security.

By focusing their pavilion on this quote, South Korea directed visitors to consider adopting a healthy lifestyle in order to create a healthy planet. This saying, along with other popular proclamations like “vote with your dollar,” represent a rhetoric that pushes people to be ethical consumers and improve the world through their individual consumption choices. By asking consumers to create change through the products they consume, this discourse expands the role of consumption to also include values related to citizenship, creating “citizen-consumers” (Johnston 2008).

The rhetoric surrounding citizen-consumers has largely been propagated by corporations and typically targets affluent shoppers who are told they can make the world better by purchasing “superior” products (Johnston 2008). Additionally, food activists have taken up the citizen-consumer discourse as a route to “eco-social change,” although they still focus on individual consumption practices that take place in the market (Kennedy, Parkins and Johnston 2018: 149). Through examining the 2015 World Expo, we found that countries are also advocating for the citizen-consumer as a policy solution. Both Switzerland and Senegal focused on how the country could educate consumers to reform their consumption habits, ignoring the role of the State as mitigator of equitable, ecologically-sound resource use. The Swiss pavilion was dominated by four imposing glass-sided towers, each filled with a different “local food product” – instant coffee, dried apple rings, alpine salt, and water. The pavilion’s premise was that visitors could take as much of each good as they wanted, but that the goods would not be replenished during the 6-month duration of the Expo.

Through this interactive experience where visitors could watch the falling levels of resources, Switzerland encouraged visitors to see the effects of their consumption habits and contemplate finite resources. In doing so, Switzerland pushed the burden of addressing food security to the citizen-consumer, overlooking both income and access to resources. Similarly, Senegal’s Expo website discussed the importance of its educational initiative, which aims to change the behavior of food consumers by urging them to buy “local produce” because of “its long-term benefits.” Interestingly, the state’s role in improving access to good, nourishing food ends at teaching individuals what they may do. We argue that economic inequality should be a central focus when addressing food security rather than relying on educational initiatives that try to reform supposed consumer deficits like ignorance and greed.

Photo of an art exhibit at the South Korean Pavilion that encouraged visitors to contemplate their consumption taken by Fred Romero, usage license CC BY 2.0

While Switzerland and Senegal sought to educate and push political responsibility onto the citizen-consumer, other countries further politicized this directive by incorporating gastronational sentiments into the role of the citizen-consumer. Gastronationalism is the incorporation of “nationalist sentiments” into all parts of the food system: production, distribution, consumption, and marketing (DeSoucey 2010: 432). Several countries at the Expo advocated that their own foods and culture are a blanket solution to the world’s food problems, simultaneously invoking national pride in their food and claiming the superiority of their food and culture.

Greece, South Korea, and Austria all featured their cuisines and food production models as paragons of health and sustainability, which both individualized the issue of “Feeding the Planet” and displayed gastronational ideals. For instance, Greece claims that the mere “adoption of the Greek diet” has the capacity to address the global issues of food allergies, obesity, malnourishment, and environmental sustainability. South Korea also promoted its own food as a global solution, asserting its culinary tradition can be applied “to resolve challenges for the whole of humanity.” In these cases, the countries advocate that consumers’ adoption of their national cuisine can be applied to a global context to serve as a convenient solution to the simultaneous problems of environmentally unsustainable food production, food scarcity and over-indulgence.

Instead of  featuring its own cuisine as the main solution, the Austrian citizen-consumer rhetoric focuses on the globalized idea of good food, invoking organic food as the global cosmopolitan ideal for consumer citizenship (Grosglik 2017). Austria prioritizes its many sustainable choices available to consumers, highlighting that its “range of organic products available to consumers in supermarkets is higher than anywhere else in Europe.” By advocating that its superior retail choices embody Austria’s leadership in a more environmentally viable food system, the role of consumer is put at the forefront while the country distances itself from responsibility, except to establish its own superiority and national pride.

By analyzing the case of the 2015 World Expo, we find that as countries addressed the issue of “Feeding the Planet,” they continually offloaded their own responsibility for addressing world hunger onto the market and the consumer. This privatization promotes the discourse of the citizen-consumer and incorporates nationalism into the political projects that the citizen-consumer should take up. Countries implied that individual consumers’ improvement of their own diets would solve the issues that the countries were tasked with addressing. Thus, the consumer is told that they can (and should) express their national pride through their food choices, as they also seek to remedy global problems of environmental degradation, malnutrition, obesity, and food scarcity.

Note: Direct quotes that are not cited are taken from the English versions of the countries’ official Expo 2015 websites, which have since been taken down.

This is part of an ongoing research project that examines how countries portray solutions to world hunger through neoliberal, gastronational, and eco-modernist ideologies.

Alana Haynes Stein — PhD student in sociology at the University of California, Davis. Her research focuses in the areas of political economy, food, stratification, and consumption. She also studies inequities in the private food assistance system.

Nadia Smiecinska — PhD student in sociology at the University of California, Davis. Her research interests include consumption and economic de-growth, political economy and social transformation in post-socialist societies of Central Eastern Europe. Previously, she spent over a decade working inside international nonprofits focused on climate change mitigation and poverty alleviation in emerging economies.