In this month’s Consume This!, Victoria Reyes examines how a special economic zone is intertwined with its host nation state, highlighting the tensions around notions of sovereignty, responsibility and desirability in modern, global consumption imaginaries. It’s a great introduction to her forthcoming book, Global Borderlands. 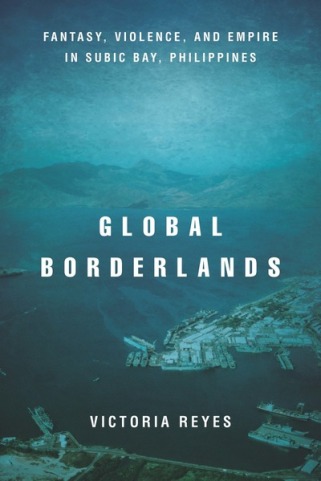 Global borderlands are legally plural places controlled by foreigners, or people not from the host country. They are places like overseas military bases, special economic zones, embassies, port cities, and all-inclusive tourist resorts – where the rules of law and socio-economic life differ from those outside their walls.

They are also sites of critical tensions that arise between and among nation-states and are built on seemingly contradictory claims: as symbols of imperialism versus cosmopolitanism or of foreign penetration into society versus ways to achieve a “good life.” These contradictions explain their staying power and get at the heart of what it means to live, work, and play within and around a global borderland.

In my forthcoming book, Global Borderlands: Fantasy, Violence, and Empire in Subic Bay, Philippines (September 2019), I analyze these contradictions and the mechanisms underlying them – that of culture, power, law and stakes. From military agreements and taxes, to high profile crimes, intimate relations, the plight of Amerasian children, work and consumption, I take the reader on a tour of six arenas of social life where these cultural contestations, negotiations and imaginations are most visible.

Take, for instance, negotiations around who pays for water and energy consumed on particular premises. Exchanges between the Philippine Department of Foreign Affairs and the U.S. military reveal how these seemingly minor decisions are entwined with understandings around sovereignty – the question of who rules – and revolved around whether particular military bases were considered U.S. territories or Philippine land that the U.S. used. These discussions were important because each came with particular rights and responsibilities bundled with it, such as who controlled access to roads and buildings and who paid for utilities, among others.

So, too, are the seemingly mundane rules around imports, exports, and tax-free status entwined with understandings of sovereignty. Who imports or exports what can often be tightly regulated, and courts rule whether containers of rice or equipment fall under a businesses’ tax-free incentives and whether a personal motorcycle, or a luxury vehicle purchased by a business official, are afforded the same. These rights and responsibilities are not guaranteed, and even those living within, or who own businesses within, the Subic Bay Freeport Zone may not realize these distinctions. Many people I spoke with would complain about taxes on gasoline, cigarettes or other goods, not realizing that things bought within the Freeport Zone would necessarily be sold tax-free.

Finally, people delineate symbolic and social boundaries – in the vein of Mary Douglas’ and Michèle Lamont’s and Virág Molnár’s, respective works – through decisions on where they buy food and why. Shopping inside one of the Freeport Zone’s supermarkets versus a palengke (local market) is retold as a matter of buying “clean” food versus “dirty” food – where both places and food are categorized as one or the other, depending on who is asked. So, too, is shopping and even visiting Harbor Point mall versus the SM Olongapo City mall – which are located across from one another, on either side of the Freeport Zone’s main gate – reconfigured to differentiate the rich and the poor and who aspires to modernity and who does not. These differences reinforce inequality through what Marco Garrido calls a “sense of place.”

These are just a few of the aspects of social life in Subic Bay that highlight how global borderlands are built around consumption imaginaries. Charles Taylor defines imaginaries as “the ways people imagine their social existence, how they fit together with others, how things go on between them and their fellows, the expectations that are normally met, and the deeper normative notions and images that underlie these expectations.” Consumption imaginaries relate to how people tie their consumption decisions – what foods they buy, the places they shop, the type of transportation they take – to their identities and their relationship to the broader world around them. Scholars have long recognized how consumption relates to identity, from Bourdieu and Veblen to contemporary scholars like Warde (2015) and Zukin and Smith Maguire (2004) to name a few, and for many living, visiting, and working in the SBFZ offers an opportunity to be a part of a modern, global community. One that is in contrast to the city right outside its gate.

Victoria Reyes— Assistant Professor of Sociology at the University of California, Riverside and a 2019-2020 AAUW American Postdoctoral Fellow. She studies culture, borders and empire and her book, Global Borderlands: Fantasy, Violence, and Empire in Subic Bay, Philippines is forthcoming (September 2019) from Stanford University Press.