In this month’s post, Ian Malcolm Taplin draws from his new book, The Evolution of Luxury, to provide a much-needed historical analysis and contextualization of high-end consumption to show how goods and their meanings have transformed. 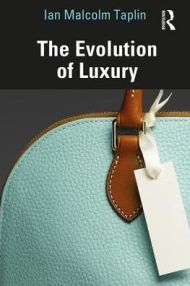 Consume This! The Evolution of Luxury

Perhaps like others I have often found luxury products intriguing and even at times alluring. As a special treat for some achievement we might indulge in an expensive product or experience. We sometimes gaze with a mixture of envy and barely suppressed anger at an ostentatious residence, massive private oceangoing yacht, or six figure watch. Perhaps implicitly we wonder why some have these things and not me? Contemplating these contradictory sentiments led me to think about the history of luxury; especially how it was experienced and rationalized in the past and how that might have changed with the onset of an industrial, capitalist consumer society. Is luxury in some way different now from how it was embraced and viewed in the past? Has it become less discrete and more pervasive than in previous centuries, used now by the super-rich as a way to not just differentiate themselves from the majority but as a positional marker that broadcasts their status? This book is the outcome of these ruminations.

As the title suggests, The Evolution of Luxury offers an analysis of how the manifestations of luxury have changed through the ages, and with that the role and actions of both suppliers and buyers of luxury products. Luxury was and continues to be used by the wealthy as a way of furthering their status relative to others. Meanings associated with luxury frequently focus upon how luxury goods are experienced, by those who have the financial means to acquire them as well as those who do not but nonetheless recognize what they represent. Luxury has always been a mark of success, status, and wealth, and as such is the very embodiment of inequality. But the way luxury was implicitly justified in the more rigidly hierarchical societies of the past is different from its current overt expressions of individual achievement.

This book examines this changing narrative paying particular attention to how currently a global class of ultra-high net worth individuals are the driving force behind the growth and profitability of luxury goods firms in the twentieth and twenty-first centuries. They have replaced the aristocrats of the past whose hereditary elite status that enabled luxury consumption was accepted providing they adequately displayed gestures of public munificence.

Whereas in the past luxury could have been seen as avarice and morally corrosive, now it is viewed in more virtuous terms as the inevitable outcome of structural changes that legitimize the acquisition and display of wealth. Pre-industrial hierarchies cloaked inequality in various secular and sacred guises to mitigate its presence; capitalism justified and reified inequality as a measure of individual success and initiative through interdependent market behavior. Wealth displays are now seen as an expression of individual effort and thereby worthy of celebration. The result of this transformation is that luxury status markers have become aspirational tools as hierarchies became porous and self-identity less ascriptive. As a consequence, we have witnessed a shift from criticism of luxury to its implicit acceptance; changes that signify fundamentally different notions of what constitutes the basis for social order.

The early chapters of the book examine the role played by luxury goods in previous societies. From the Roman elite whose justification for indulgence was mitigated by their provision of certain public spectacles to Renaissance Princes who used patronage of artists as a way of securing sacred favors. With industrialism came a new group of wealthy – those for whom income was generated by manufacturing initiatives. But they too sought material refuge in many of the pursuits of their aristocratic forbears, whether it be in stately homes, art, or high fashion. By emulating the lifestyle of an earlier elite they assumed this would accord them the appropriate status to which they now felt entitled. In recent decades, the growth of ultra-high net worth individuals globally has provided a new group of luxury consumers. Perhaps less secure in their elite status, many in this group use luxury as a way of projecting their newfound power.

The second half of the book looks at three sectors which are emblematic of luxury: fashion, art, and wine. As the business of fashion emerged in the mid-19th century and became a commodity with the growth of the Department store and mass production, a niche market of expensive, high quality, and difficult to obtain goods nonetheless persisted. As twentieth century consumers were able to shape their own identities, a mass market for clothing coexisted with a high end fashion industry that catered to the wealthy. Increasingly dominated by a group of major ‘brands’ that offer referential lifestyles for the new rich, these firms are global conglomerates who use economies of scope as well as integrated supply chains to retain production flexibility and an aura of exclusivity and status for their products. With high rates of profitability and an apparent immunity to business cycle downturns, a core group of luxury firms has successfully built global brand recognition as the embodiment of sartorial luxury.

By tracing the transformation of art markets during the past centuries, one can identify ways in which art has been used as a status good as well as a public good in a sacred setting. But as art markets became consolidated and commodified in the last 100 years, mega galleries, art consultants, and auction houses now transform hitherto aesthetic aspects of art into investment grade commodities.

Finally, fine wine has increasingly become a status product rather than a beverage to complement a nice meal. In examining the growth of wine from Napa, California, one can see how the pursuit of oenological excellence among a small group of wineries has resulted in high price, limited availability products that only a select few are able to acquire. It has become the quintessential luxury beverage for the super-rich.

As demand for high priced and scarce goods in these sectors increased, in each case key actors manipulated markets to purposefully either consolidate their pre-eminence or manufacture the requisite scarcity that affords them canonical status. The demand for and supply of luxury goods is global; consumers seek validation and affirmation of their status while producers engineer scarcity. Luxury is seen not only as good; it is virtuous, its demand possibly insatiable and for producers extremely profitable.

Ian Malcolm Taplin — Professor of Sociology, Management and International Studies at Wake Forest University. He is currently writing a book on the organization of the wine industry in Napa, California.

Carla is an aspiring Digital Sociologist with a Bachelor's degree in Sociology and a Master's degree in Business Administration from Montclair State University. She has over 5 years of digital marketing experience. Her research interests are consumer philanthropy, lifestyle choices, and anything revolving around the digital world. View more posts