In this month’s Consume This!, Gary Yeritsian gives us a thought-provoking and entertaining glimpse into the world of professional wrestling, suggesting how WWE’s use of social media for highly-scripted, sanctioned forms of audience participation nevertheless creates possibilities for contestation and disruption. 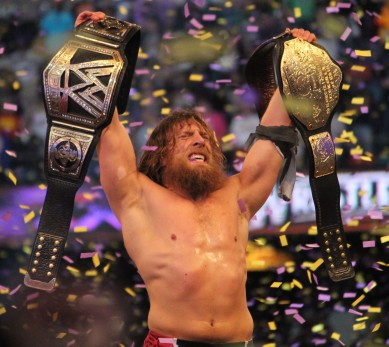 Cultural Participation From Above and Below: The Case of Professional Wrestling Audiences
By Gary Yeritsian

‘Participation’ has become a buzzword in much of the recent academic and popular discourse regarding media and culture. The widely read work of Henry Jenkins is especially noteworthy in this regard. New media, for Jenkins, are the harbinger of a ‘participatory model of culture, one which sees the public not as simply consumers of preconstructed messages but as people who are shaping, sharing, reframing, and remixing media content in ways which might not have been previously imagined’ (2013: 2). In particular, the shift from the one-to-many logic of mass media to the many-to-many logic of social media has blurred the distinction between audience and content provider.

Yet, Jenkins concedes that media producers ‘also seek to shape and direct our participation into forms that they see as serving their own interests’ (2015: 14). Such direction often takes the form of ‘brand communities’ consisting of committed, active, and most importantly, loyal, consumers (Muniz and O’Guinn, 2001). Cultural industries have seen social media as prime space for the construction of brand communities given the enhanced opportunity for consumer engagement. Contemporary brands aim to capture the value generated by the autonomous sociality of consumers (as opposed to the older dynamic of brand messages being ‘dispensed’ to consumers via broadcast media).

What emerges in contemporary work on branding and consumption, I argue, is a logic of contestation at the heart of cultural participation. On one hand, the brand aims to foster ‘from above’ forms of managed, controlled, and sanctioned engagement and participation. On the other hand, there exists the capacity ‘from below’ of members of the brand community to individually and collectively voice their own perspectives and potentially affect the brand’s behavior and orientation. In a recent article in Journal of Consumer Culture, I develop these concepts empirically through a case study of professional wrestling.

Wrestling has been a linchpin of American popular culture since the latter half of the 20th century, with the largest company, World Wrestling Entertainment (WWE) – which effectively exercises a monopoly in the United States – valued by Wall Street at US$5B and drawing millions of television viewers and sellout crowds.

The genre represents a ‘strategic’ case study for a number of reasons. First, audience participation is indispensable, given that shows are produced to arouse particular reactions at critical dramatic moments: enmity toward a villain who betrays a friend, shock and excitement at a surprise return, triumph when the protagonist overcomes the odds, and bemusement in comedic moments of the presentation. The conventions of the genre are straightforward, featuring soap opera style narratives in which ‘babyfaces’ (protagonists) and ‘heels’ (antagonists) fight it out in simulated contests over either a personal issue or a championship title.

The presence of a live audience encouraged to react loudly and enthusiastically to the content makes wrestling more inherently participatory than other cultural forms. Television and film audiences may tweet or blog about their favorite shows but at a significant spatiotemporal distance from one another and from the performance. Contemporary theater audiences may laugh or gasp, but they are certainly not encouraged (or allowed) to react as dynamically as wrestling audiences. Sports audiences are perhaps the most comparable, insofar as they are boisterous and loudly engaged, but legitimate sporting events cannot be scripted to arouse particular reactions.

Wrestling shows are built around ‘sanctioned’ forms of participation, as live audiences are supposed to cheer the protagonists, jeer the antagonists, and react enthusiastically to storyline surprises and climaxes. Moreover, with WWE developing an elaborate social media strategy, such participation takes place online as well, as fans follow performers’ social media pages, tweet using official hashtags, and vote in polls via the company website. Executive Stephanie McMahon has trumpeted WWE’s primary social media objective as not disseminating content outwards but rather engaging fans, and ‘listening and responding’ to their engagement. The company uses social media to extend its televised stories online and generate a 24/7 fictional environment in which fans can immerse themselves.

However, fans can use those same media to critique the direction of existing storylines and offer alternatives. These unsanctioned forms of participation in turn manifest themselves at live arenas, with increasingly unruly groups of ‘hardcore’ fans who react to the product presented to them in unpredictable ways (e.g. booing a top protagonist, or raucously cheering performers who they feel are talented but underutilized).

In recent years, the company’s key storylines have been impacted in crucial ways by expressions of unsanctioned audience participation ‘from below.’ Most notably, in 2014, fan protest forced management to insert Daniel Bryan, an immensely popular though undersized former independent wrestler whom the company did not view as a top attraction, into the main event of its biggest show of the year, Wrestlemania.

Earlier that year, fans largely anticipated that Bryan would be the winner of the Royal Rumble – a 30-man match whose winner goes on to headline Wrestlemania – given that he was immensely popular and riding a wave of momentum. However, WWE had different plans. When Bryan turned out not even to be a participant in the match, the fans turned against the show, booing vociferously the rest of the way. Moreover, they gathered in online forums to vent their disillusionment and to develop an autonomous critique of the storyline.

As documented in Dave Meltzer’s insider Wrestling Observer Newsletter, when faced with the intensely negative fan response, the company found itself having to change course. It entirely rewrote Wrestlemania around Bryan, to the thrill of the audience, online and offline. After Bryan won the world championship in the culmination of the show, 70,000 fans unanimously jabbed their fingers into the air and chanted his catchphrase: ‘Yes! Yes! Yes!’ It was a moment of victory not only for the underdog wrestler but also for popular ‘participation from below.’

In the years since, WWE has continued to make critical concessions to its audience as it struggles to anticipate, manage, and get ahead of fan participation. It seems that wrestling’s status as soap opera has two facets. Not only will ‘good’ and ‘evil’ characters continue to battle one another indefinitely, so will management and the fans, over the creative direction of the stories being presented. In so doing, they will continue to demonstrate that cultural participation contains within it the potential for both popular empowerment, on the one hand, and managerial incorporation, on the other.

Gary Yeritsian is a Ph.D. Candidate in Sociology at UCLA. His work has been published in Critical Sociology and the Journal of Consumer Culture.